On Monday, 19 October 1896 Constable Arthur Lowe was stationed at the Oxley Police Station when he attended a parade in Brisbane (City) about 11 km away. At about 6:00 pm, while returning to Oxley his horse shied at a culvert not far from the station. The horse stumbled and fell to the ground with Lowe still in the saddle. Lowe, who was unconscious from the fall, was taken to his home and attended to by Dr Charles Kebbell who ordered his removal back to Brisbane.

Arrangements were made for a goods train to take Lowe to the Roma Street railway station where he was met by the City Ambulance Transport Brigade (C.A.T.B.) and conveyed to the Brisbane Hospital. Lowe, still unconscious, arrived at the hospital at about 1:30 am and it appears that he died soon after from a fracture to his skull and concussion of the brain. Lowe’s wife, who was in ill-health at the time, accompanied him to the hospital.

Constable Lowe was 32 years of age and was transferred to Oxley only a few months before his death. He had two children, one aged 5 years and the other just 6 months. The body of Constable Arthur Lowe was interred in the Toowong Cemetery (Brisbane) on Wednesday, 21 October 1896. Police Commissioner William Parry-Okeden, Chief Inspector Stuart, Sub-inspectors Urquhart and Marrett took part in the procession along with approximately 80 members of the Queensland Police.

Lowe was born in England and he was a sailor at the time he joined the Queensland Police on 1 September 1887 – Registered No. 226. During his brief police career, he served at Brisbane, Windorah, Tambo, Brisbane, Gatton and Oxley. In 1892 he received a reward of £5 ($10) for the arrest and conviction of Charles Taylor and Cornelius Dwyer for robbery with violence at Tambo.

In 1974 the Brisbane City Council adopted a policy to convert old monumental cemeteries in the Greater Brisbane Area into parkland by planting trees, shrubs and gardens. Arthur Lowe’s grave and described it as being in a dilapidated condition and the council sought advice from any person claiming ownership or interest in restoration of the grave. No replies were received and as a consequence, the grave was demolished.

During 2019, the FQPM commenced a project to locate the burial places of those former officers whose names appear on the Honour Roll. During this project, the headstone to Arthur Lowe’s grave was located. The area where he was buried was not converted into parkland and his headstone was located lying askew on the ground near the position of the original plot. The FQPM set about to restore the grave and ensure that the headstone was secured in an upright position. T Wrafter & Sons were engaged to undertake the restoration.

As an interesting side note, the headstone reveals that Lowe’s wife (Janet Lowe) died on 26 June 1915, aged 45 years. Lowe’s infant son (Arthur James Lowe), who was just six months old at the time of Lowe’s death, died two months later. Lowe’s other son (Herbert George Lowe) was killed in action in France on 29 October 1917, aged 27 years. Strangely, his war records indicate he and two other Australian soldiers were killed instantly by a shell while proceeding up Broodseinde Gully in Belgium heading to the front line. The three soldiers were buried in a common grave in Pill Box Cemetery near Ypres. His body was later exhumed and reinterred in the Hoogle Crater Military Cemetery 4km east of Ypres. Herbert George Lowe was a member of the 25 Battalion AIF. 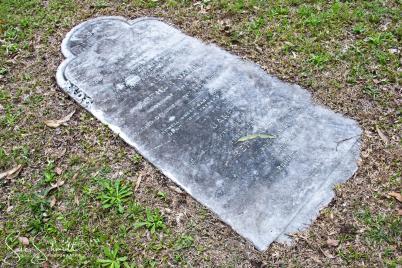 Constable Lowe’s headstone reinstalled on his grave after restoration.