In early 2013, the President of the FQPM Bob Burns APM had informal discussions with Police Commissioner Ian Stewart APM regarding a project the FQPM had undertaken. The project was to research the family background of the first Commissioner of the Queensland Police (QP) David Thompson Seymour and to locate his burial place. The Commissioner expressed an interest in pursuing the project in light of the QP150 Celebrations.

David Thompson Seymour (5 November 1831 – 31 January 1916) was born at Ballymore Castle, County Galway, Ireland. He entered the army as an ensign on 1 February 1856, was promoted to lieutenant in the 12th Regiment on 23 February 1858, and served at Limerick and Deal before he arrived in Sydney on 7 July 1859 in command of a draft. On 13 January 1861 he arrived in Brisbane in command of the first detachment in Queensland after separation from New South Wales. He was appointed aide-de-camp and private secretary to the governor on 11 May 1861.

On 1 January 1864 he retired from the army to become acting commissioner of police under the Police Act of 1863 and was confirmed in office in July. He held the office of Police Commissioner from 1 July 1864 – 30 June 1895. At the time of his appointment, the Queensland Police consisted of 150 white officers and 137 Native Mounted Police to protect a population of 61,497. He established a detective force in 1864, one of the many reforms he undertook in his thirty-one years as Commissioner. He travelled extensively to the far reaches of the state and brought the concerns of his men to the Government. In 1880 he showed his faith in the skills of the native police by sending indigenous trackers to Victoria to participate in the location of the infamous Kelly gang. By the time of his retirement in 1895, Commissioner Seymour had increased police numbers to 907. 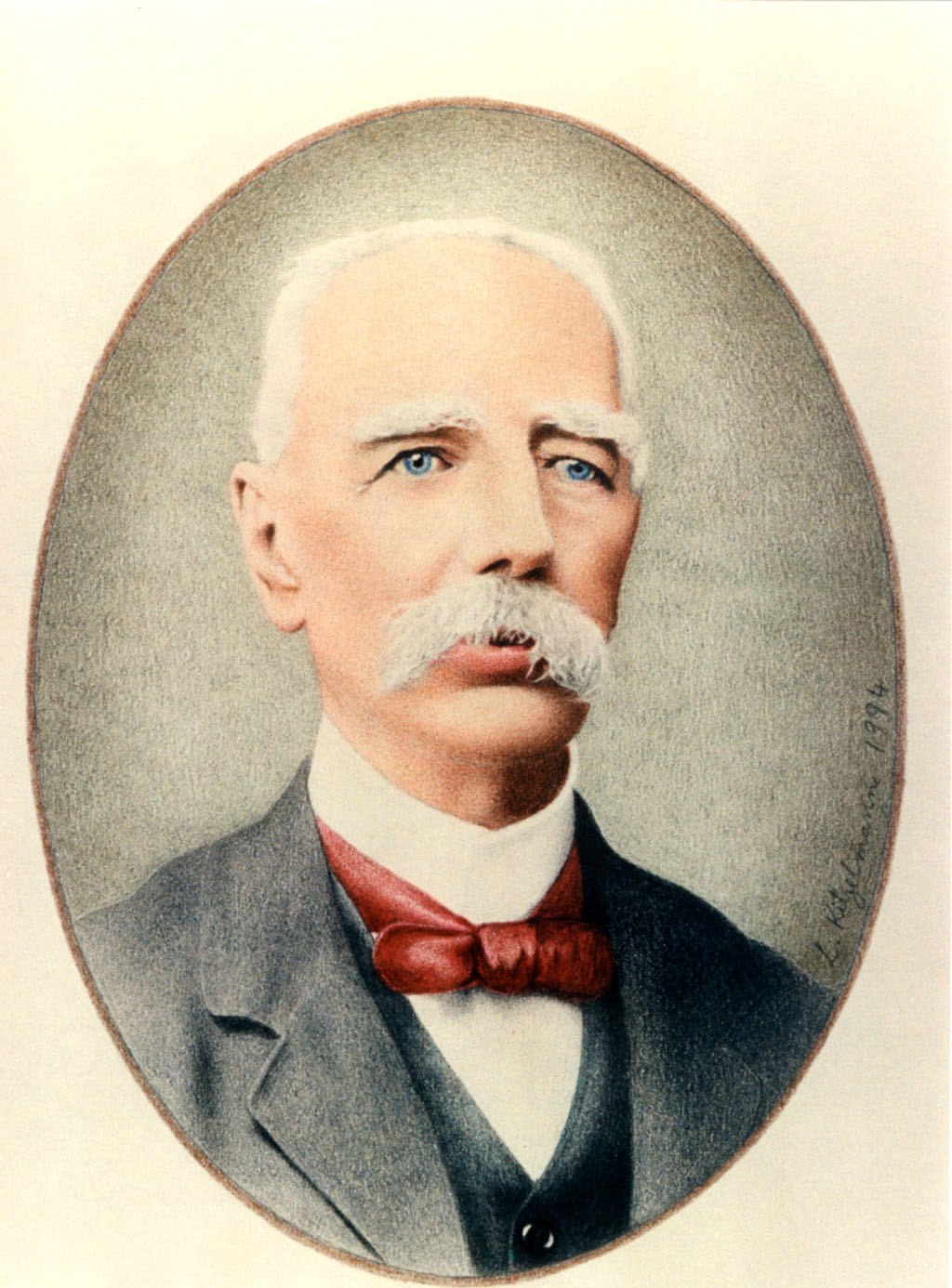 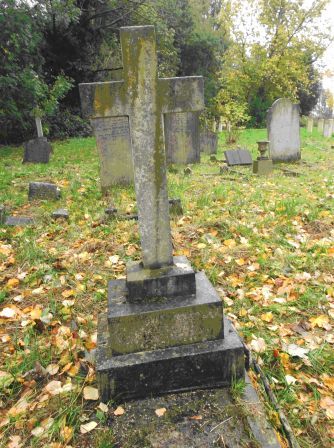 Tracing the Seymour family history proved a real challenge due to the extended family resulting from two marriages. His first wife, Caroline Matilda Seymour, had died in Brisbane and was buried at Toowong Cemetery in 1884. Caroline and David were married in Brisbane in 1864, the year he was appointed the Police Commissioner. They had six daughters. In 1888 he married Sara Jane Stevenson and they had twin sons. Sara died in 1916. Some family members were eventually located in Victoria and Western Australia as well as the United Kingdom.

It was established that David Thompson Seymour had retired to England and he died on 31 January 1916 in London. He was buried in Hither Green Cemetery in Lewisham in the south-east of England.

During the course of inquiries in England, a close working association was developed with FQPM counter-parts, the Friends of the Metropolitan Police Historical Collection (Friends), in particular through their Chair, Sioban Clark. The Friends arranged a preliminary clean up of what was believed to be David Seymour’s grave by removing some of the long grass and the build up of moss and green mould on the monument. Once clean, the precise wording on the monument confirmed that David Seymour was buried there along with his second wife Sara.

The FQPM continued negotiations with the Lewisham Council with a view to having the monument restored and a plaque placed to commemorate both the QP150 Celebrations and the significance of David Thompson Seymour as the first Commissioner of the Queensland Police. Negotiations reached a stage where the Lewisham Council agreed to the FQPM proceeding with work on the monument and the placement of a plaque provided an indemnity document was completed. The grave was a private one and therefore it required family consent before work could be undertaken. In addition, an application and anticipated costs were required by the Lewisham Council.

After much communication, organisation and coordination between Queensland and the UK, Seymour’s grave was eventually restored and a dedication ceremony was organised for Saturday, 31 January 2015. The morning of the occasion was heralded with a fine cold English morning. All the guests met at the old Hither Green Cemetery as arranged and it was somewhat of a family reunion for some of the ancestors of David Thompson Seymour.

The Commissioner of the Metropolitan Police was represented by Commander Simon Letchford, who arrived with Police Chaplain Jonathon Osbourne and two local Neighbourhood Watch officers in uniform (Inspector Chatterton and Sergeant Berry). Ken Smith, the Agent General for Queensland and his wife also attended and chatted informally with the families. Regrettably, the family member who added stimulus to this project, great-great-granddaughter Lucy Proudlock was away overseas and could not attend the dedication.

The FQPM extends its most sincere gratitude to Sioban Clark, Chair of the Friends of the Metropolitan Police Historical Collection and her Committee for the extraordinary support and organisation they provided at the local level in the UK. 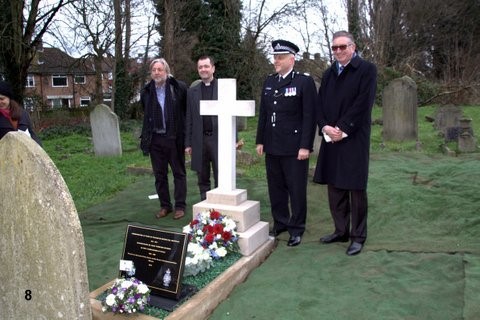 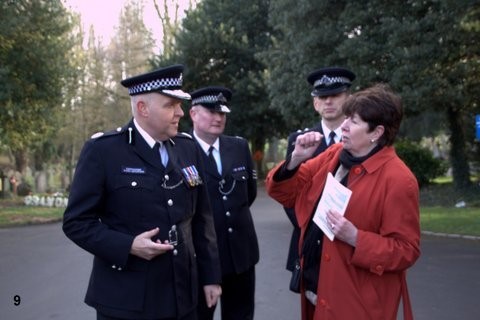 At the conclusion of the ceremony, the guests took the opportunity to chat and pose for photographs. They then retired to a nearby hotel for a welcomed hot drink and pastries. Agent General Ken Smith welcomed the attendees and delivered a message from the Commissioner of the Queensland Police Service, Mr Ian Stewart APM. Michael Proudlock, the great-grandson of David Thompson Seymour, spoke on behalf of the family. He stated how proud he was that three generations were present to pay due respects to their ancestor, although, in the main they had very little knowledge of his life until information was provided by the FQPM and local research by the Friends of the Metropolitan Police Historical Collection on Seymour’s days in England.

The family members were thrilled to be able to come together and take part in the event. Many hadn’t realised what a fascinating ancestor they had. The youngest guest was a 2 year old, the 6th generation from David Thompson Seymour. Two other decendents, were allowed the time off school to attend the ceremony on the understanding they were to write all about the day’s event and the history of their ancestor for their school newsletter.

The FQPM are very grateful to the Friends of the Metropolitan Museum Historical Group for their assistance in firstly locating the grave of David Thompson Seymour and attending to administrative matters which for the tyranny of distance would have made things potentially difficult for the FQPM.

During a later overseas trip, FQPM Committee Member Clare Hackett presented (on behalf of the FQPM) a hard covered QP150 Book to Sioban Clark, the Chair of the Friends of the Metropolitan Museum Historical Group in appreciation of the effort put into the project by the ‘Friends’. 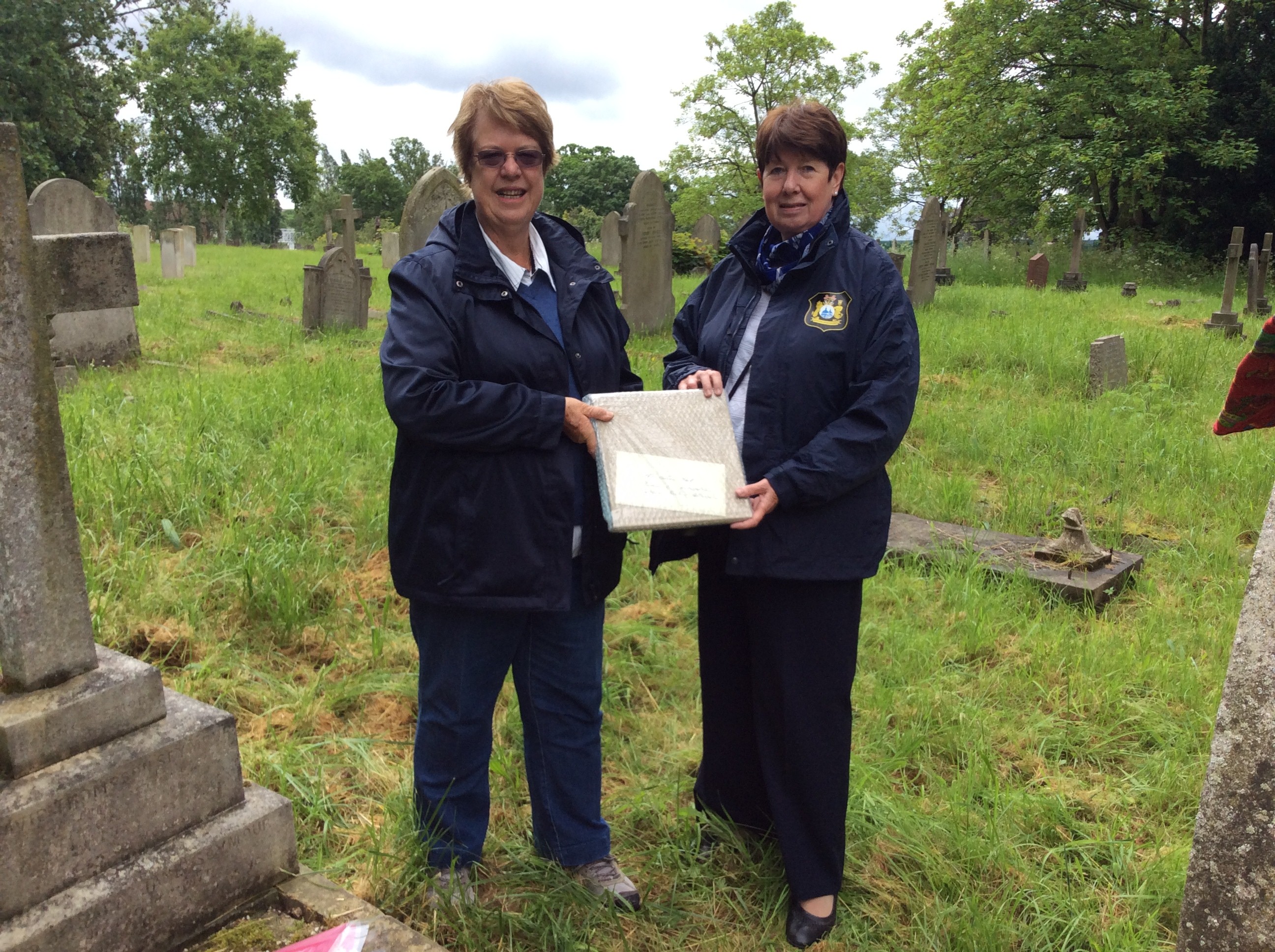 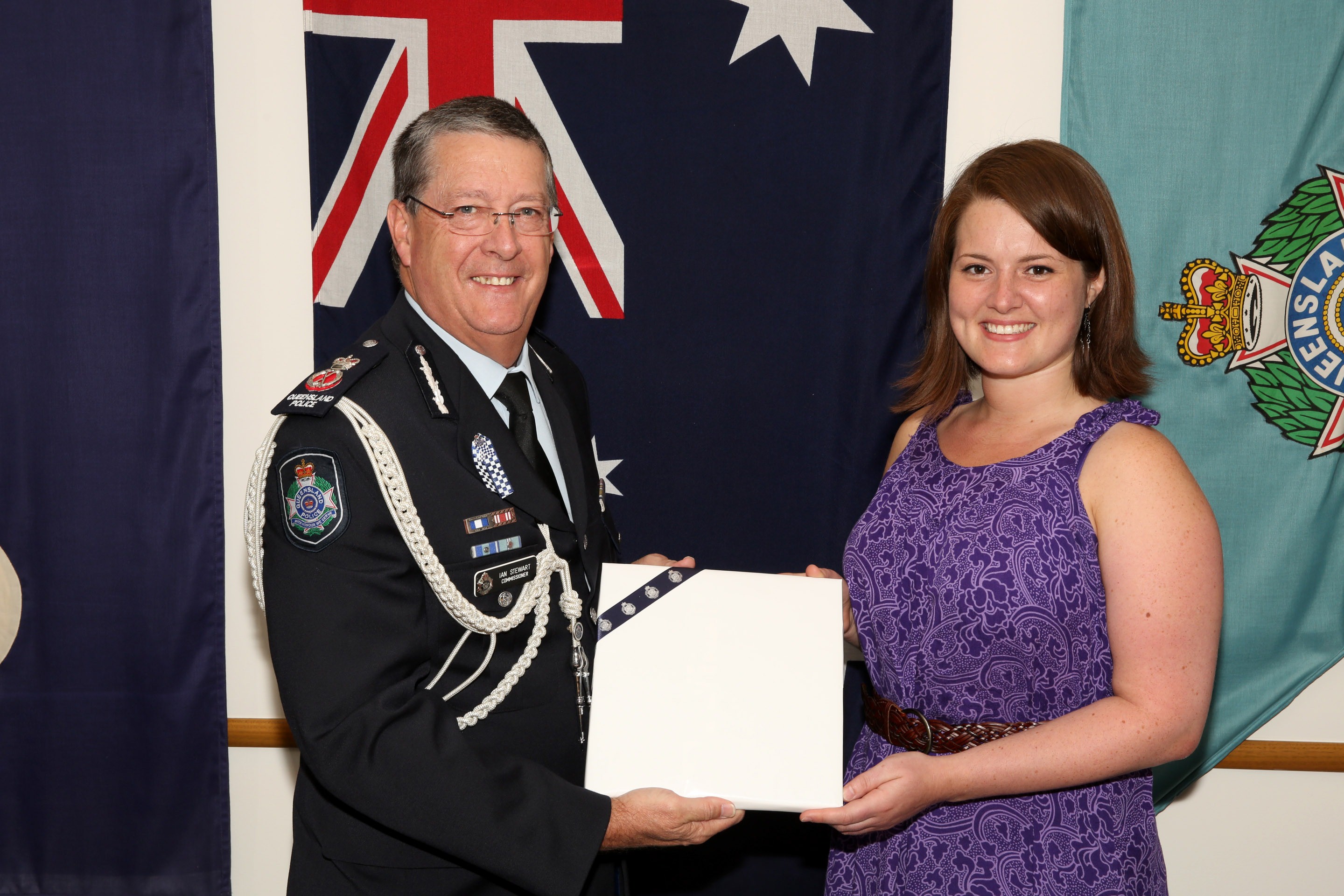 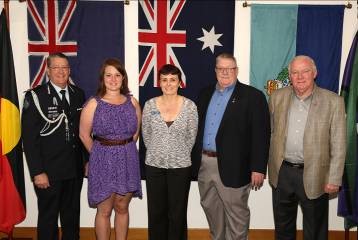 A strange turns of events occurred during the course of this project. In April 2015, a young woman knocked on the office door of the Queensland Police Museum Curator Lisa Jones. She identified herself as Lucy Proudlock and asked if she could find out any information about her ancestor, former Police Commissioner David Seymour.

Ms Jones said it was a jaw-dropping moment. “It was the most amazing thing. I just said: ‘Really?’ She was completely unaware of all that had been going on and it was purely by chance that she came here at this time.” Ms Jones said: “She is a lovely girl and we were delighted to be able to show her the photos and D.T. Seymour’s file.”

Commissioner Ian Stewart was also amazed to hear of the chance encounter and asked to meet Ms Proudlock. He had the opportunity at a morning tea in May 2015, along with FQPM President Bob Burns, FQPM Secretary Ian Townsley, and QPM Curator Lisa Jones where he presented Lucy with a QP150 commemorative book.

After returning to London, Lucy advised that the whole family had become very excited about the prospect of a plaque for their ancestor’s grave and they all planed to attend when it is eventually installed later in 2015. The association with Lucy and her family certainly simplified the administrative process in finalising the arrangements for the completion of the FQPM D T Seymour grave project.