The Seymour family grave in the Toowong Cemetery was in a very dilapidated state. Due to its historic link to David Thompson Seymour, the first commissioner of the Queensland Police, the family grave was restored after some fine work by FQPM contractors, Brisbane Memorial Care + Repair. That project was finalised in 2014 with a well-attended unveiling and dedication ceremony. The Friends of the Toowong Cemetery made a significant contribution to the Seymour grave project, in particular, the dedication ceremony arrangements.

During the course of the Friends of the Toowong Cemetery’s annual archaeological dig (with students from the Queensland University) in 2015, the headstone of William Anthony Brown, former Sheriff of the High Court in Queensland was located. The headstone unfortunately had a portion missing but on it were also the details of Thomas Seymour, the young son of David Seymour, who had been interred with his grandfather, William Brown. William Brown and Thomas Seymour were initially buried in the Paddington Cemetery which operated from 1844 to 1875 and was Brisbane Town’s main cemetery.

By 1910, the old Paddington Cemetery fell into disrepair and it was proposed the grounds be turned into a recreation reserve. In 1911 Queensland Parliament passed The Paddington Cemetery Act. This authorised the government to resume the cemetery and to relocate the remains to another cemetery within 12 months. The remains of 186 people were removed and reburied, mainly in Toowong Cemetery, and 136 memorials were removed and relocated. A further 505 memorials and headstones were transferred to a small reserve established next to Christ Church, Milton in 1913 to 1914. 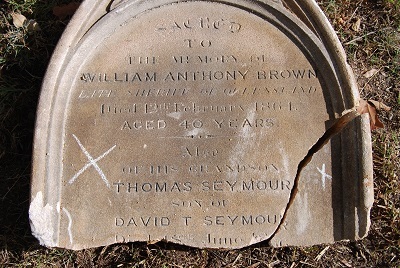 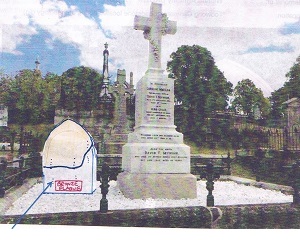 The sandstone headstone remnant of Brown and Seymour was in good condition with little damage to the remaining top section. The FQPM Management Committee took on the project of restoring the memorial and obtained an estimate to have the headstone located with the Seymour family grave at Toowong. The Seymour family grave has no lettering on the side where the proposed installation would be placed so as not to obstruct Seymour family details. A quote was obtained from Brisbane Memorial Care + Repair which included fabricating a reinforced off-form concrete ‘ghost’ to replicate the missing section in profile, connect the existing sandstone to the ‘ghost’ using stainless steel dowels and insert the entire headstone upright in a new ‘sleeved’ concrete footing adjacent to the existing Seymour family headstone. The estimate obtained amounted to $2,145.