David Thompson Seymour (5 November 1831 – 31 January 1916) was appointed the acting commissioner of the Queensland Police on 1 January 1864 and his position as the first police commissioner was confirmed in July of that year. He held the office of Police Commissioner from 1 July 1864 – 30 June 1895. At the time of his appointment, the Queensland Police consisted of 150 white officers and 137 Native Mounted Police to protect a population of 61,497. Seymour retired to England and he died on 31 January 1916 in London. He is buried in Hither Green Cemetery in Lewisham in the south-east of England.

On 28 June 1864 in Brisbane he had married Caroline Matilda Brown, daughter of William Anthony Brown, sheriff of Queensland; they had six daughters. Following Caroline’s death in 1884, he married Sara Jane Stevenson, aged 23, on 6 June 1888; of their two sons, one became a well-known engineer in Kuala Lumpur. He died on 31 January 1916 in London.

Caroline Matilda Seymour was buried at Toowong Cemetery (Brisbane) in the Seymour family grave. The family grave is listed on the Brisbane City Council (BCC) Heritage Trail. This cemetery tour includes the graves of persons of some note who are interred at Toowong Cemetery. Unfortunately, the Seymour family grave had fallen into disrepair before the FQPM took on the project of restoring it due to its historic link to the first commissioner of the Queensland Police.

QBANK (formerly the Queensland Police Credit Union) made a generous donation which allowed the project to proceed almost immediately. The FQPM acknowledge the contribution by QBANK to this worthy project.

The Seymour Family Grave – Before and After 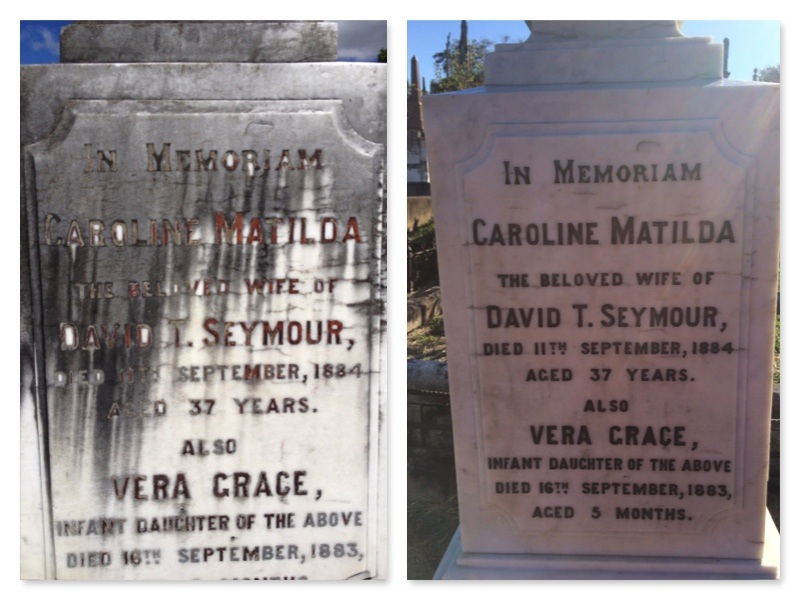 Caroline Matilda – David Seymour’s first wife – Before and After

David De Burgh’s grave – Before and After